HOME with you, to you. In making rattan furniture, a free-forging technique inspired by the motions of the sea and a whiff of salty air In making rattan furniture, a free-forging technique inspired by the motions of the sea and a whiff of salty air 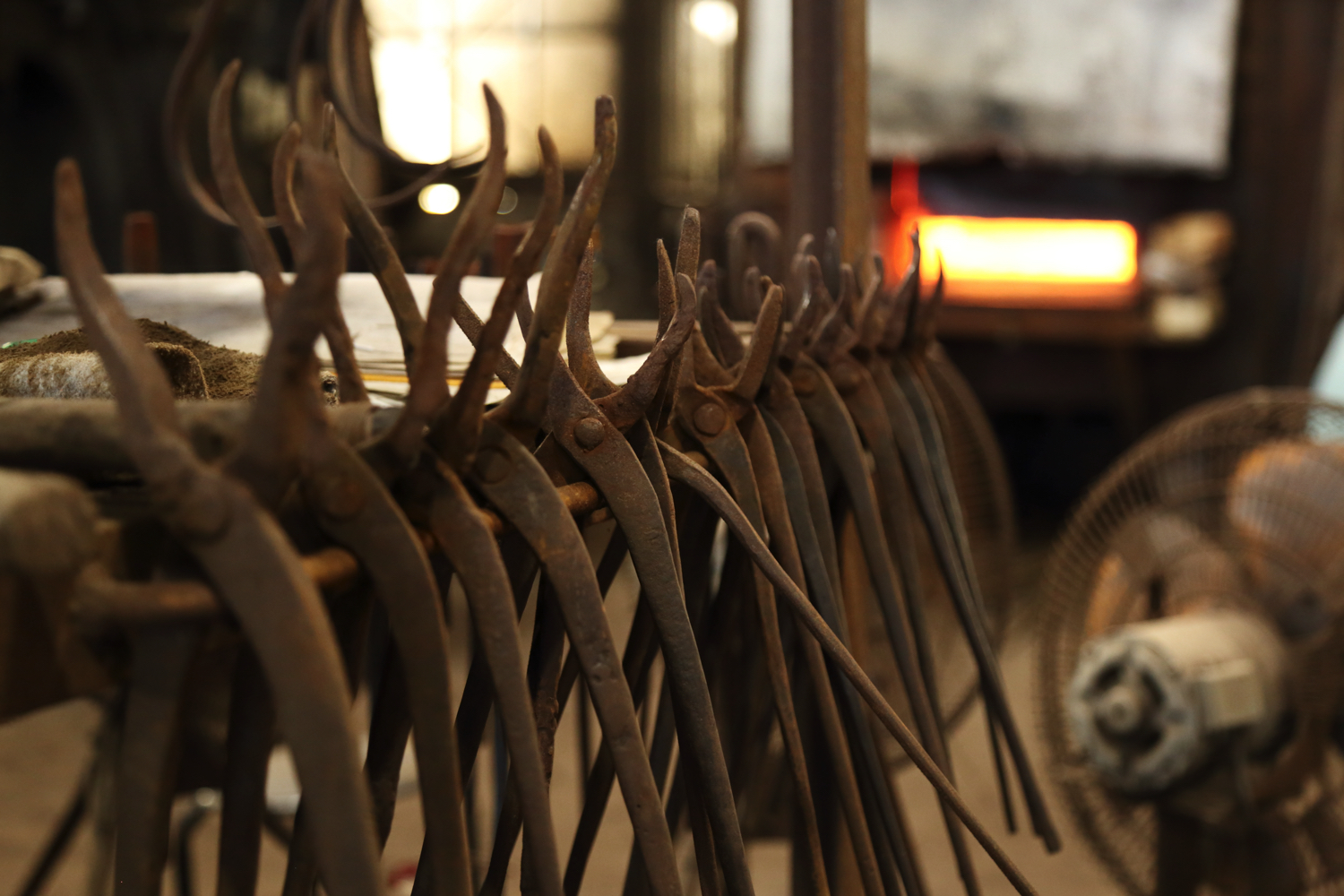 Tomonoura in Fukuyama City was once known across Japan as “a port waiting for a favorable tide.” As the name “Kaji-cho (literally blacksmith town)” still remains, there were many blacksmiths who operated their shops alongside each other in Tomonoura.
Industrialization progressed over time, and the blacksmiths and ironworks factories moved to the Ironworks Complex that was newly established along the coast about 3km north. But even today, some of those same businesses continue to operate.
“SANGYO Corporation,” one of the cluster of factories, was established as a ship metal fittings factory in 1951. About 20 years later, they moved into land-based operations and started manufacturing fittings for wire ropes and bridges.
Around 2012, SANGYO formed partnerships with local furniture manufacturers. An opportunity came knocking from Fuchu City known for its furniture-making and request for a cooperative effort in production.

Preserving a history of “free forging” 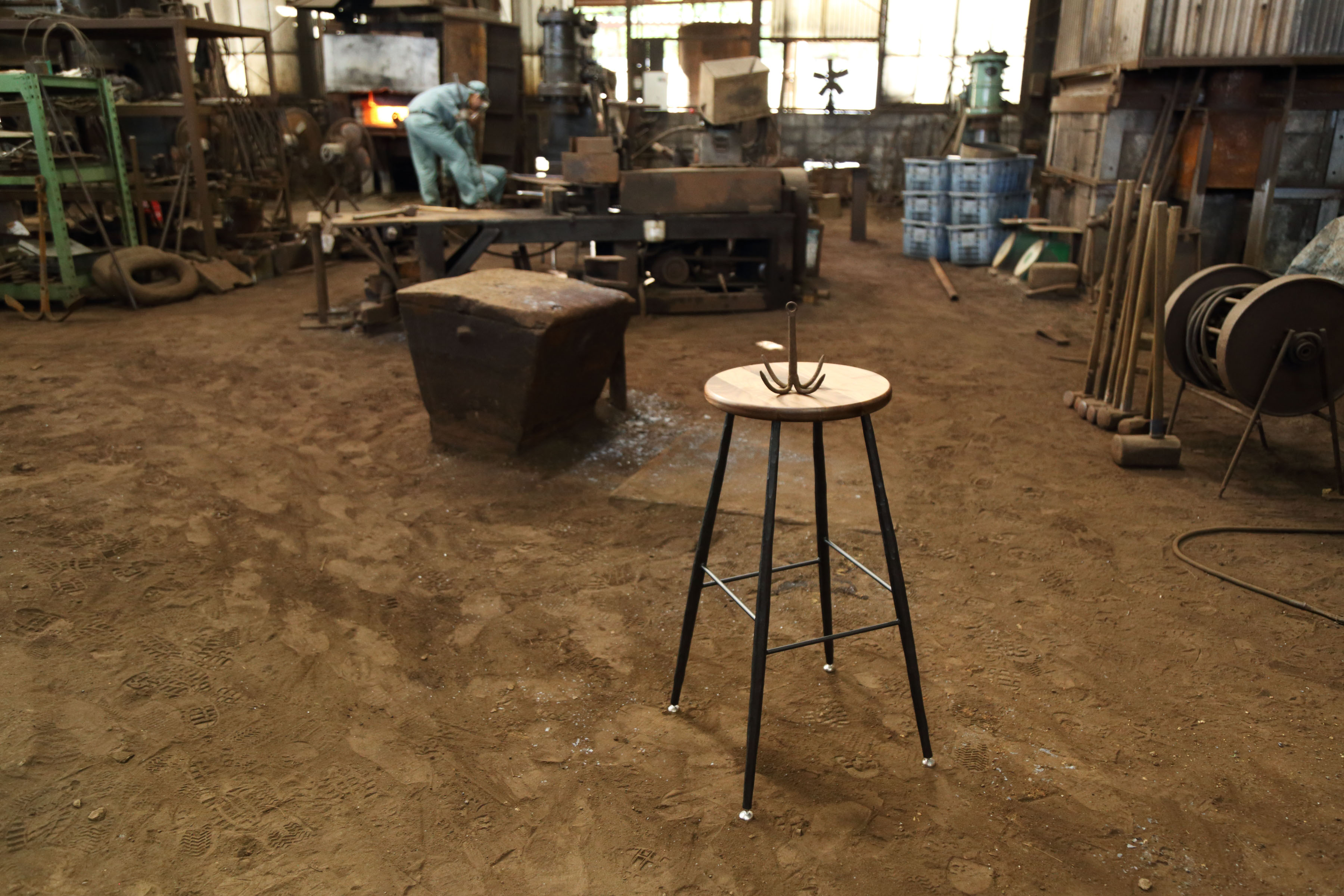 Around 2016, when full-scale OEM production for furniture manufacturers started, an anchor manufacturing factory within the same Ironworks Complex unfortunately decided to close its business due to the age of its owner. The factory, having a history of more than 100 years, was one of only a few factories left manufacturing anchors by the “free forging” technique.
Free forging is the technique of forming hot metal material by striking (tempering). The anchor factory had preserved this forging technique, which is said to have continued for more than 2,000 years, but the factory and the technique were about to disappear along with many others.
Mr. Hiromasa Hayama, the third generation President of “SANGYO” says, “I can say now it was a sense of mission of keeping this technique from disappearing in Japan, and at that time, I was self-absorbed.” He raised his hand in a flash to take over the anchor factory, including the land, building, and a then-52-year-old veteran craftsman.
From that moment, a fusion began between high-precision processing using state-of-the-art robots and traditional free forging having continued for more than a century.

Application of anchor technique to furniture-making 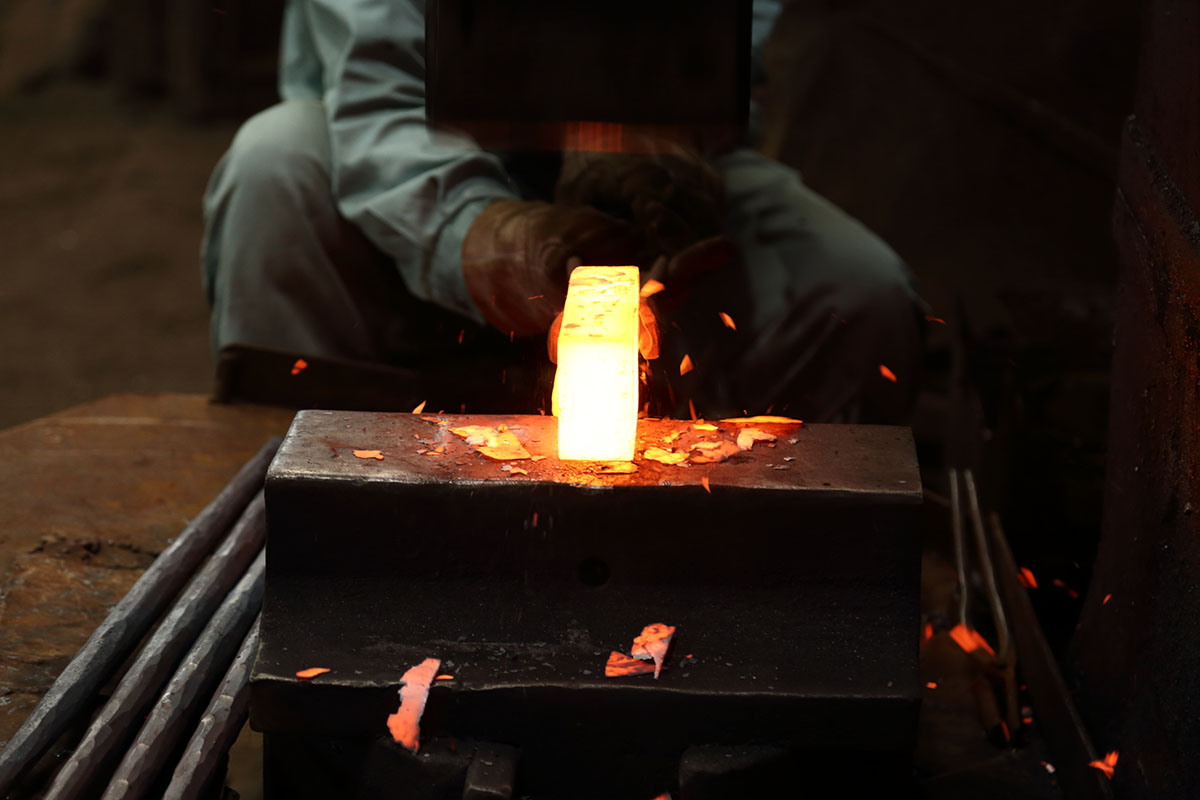 As previously mentioned, free forging fundamental to anchor-making is a technique of reshaping hot metal through application of pressure by striking with a hammer, etc., while enhancing the strength of metal. A solid metal blank heated up to approximately 1,250ºC shape-shifts when being forged with clanging sounds, and it can be bent easily while it is hot. Anchors are made in this way.
“What if the free forging technique can be applied to furniture-making?”
What was born from Mr. Hayama’s inspiration was their own furniture brand “TAonTA.” 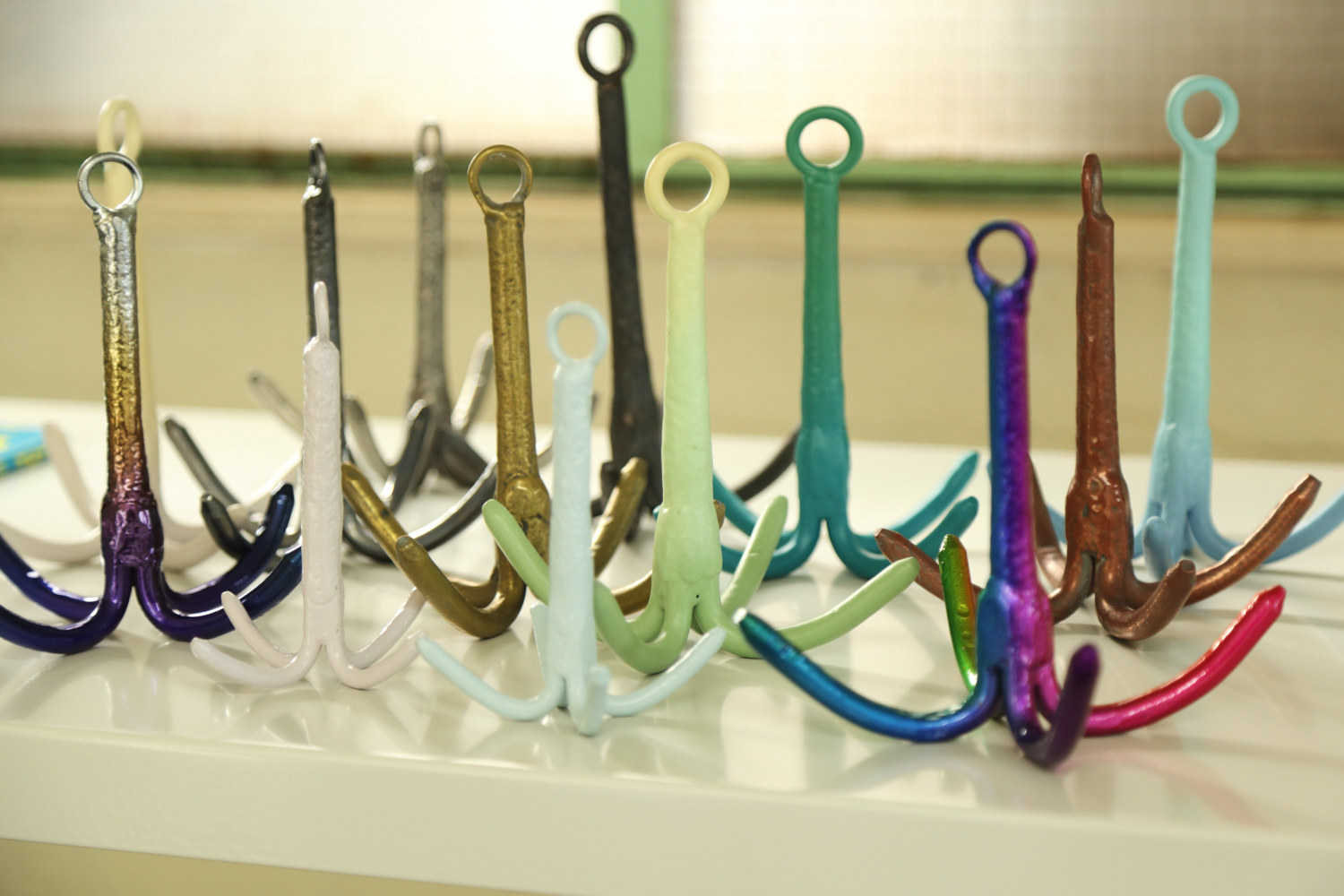 “TAonTA”-brand furniture is heavy because forged iron is used. “TAonTA”-brand furniture has a wavy surface because it is tempered with a hammer.
Workprints of anchor manufacturing are directly left on the furniture because Mr. Hayama wanted to pass the technique down to successive generations.
Mr. Hayama emphasizes, “Expansion of high technology to make precision parts and low technology to make anchors into furniture allows us to create furniture of our own design. In 2019, we will start furniture production on a full-scale basis. Handling of various processes including forging is our strength.”
The challenges of the manufacturer “SANGYO” and the furniture brand “TAonTA” have just started. When tradition and innovation intersect each other, “the history of an entirely new tradition” begins. 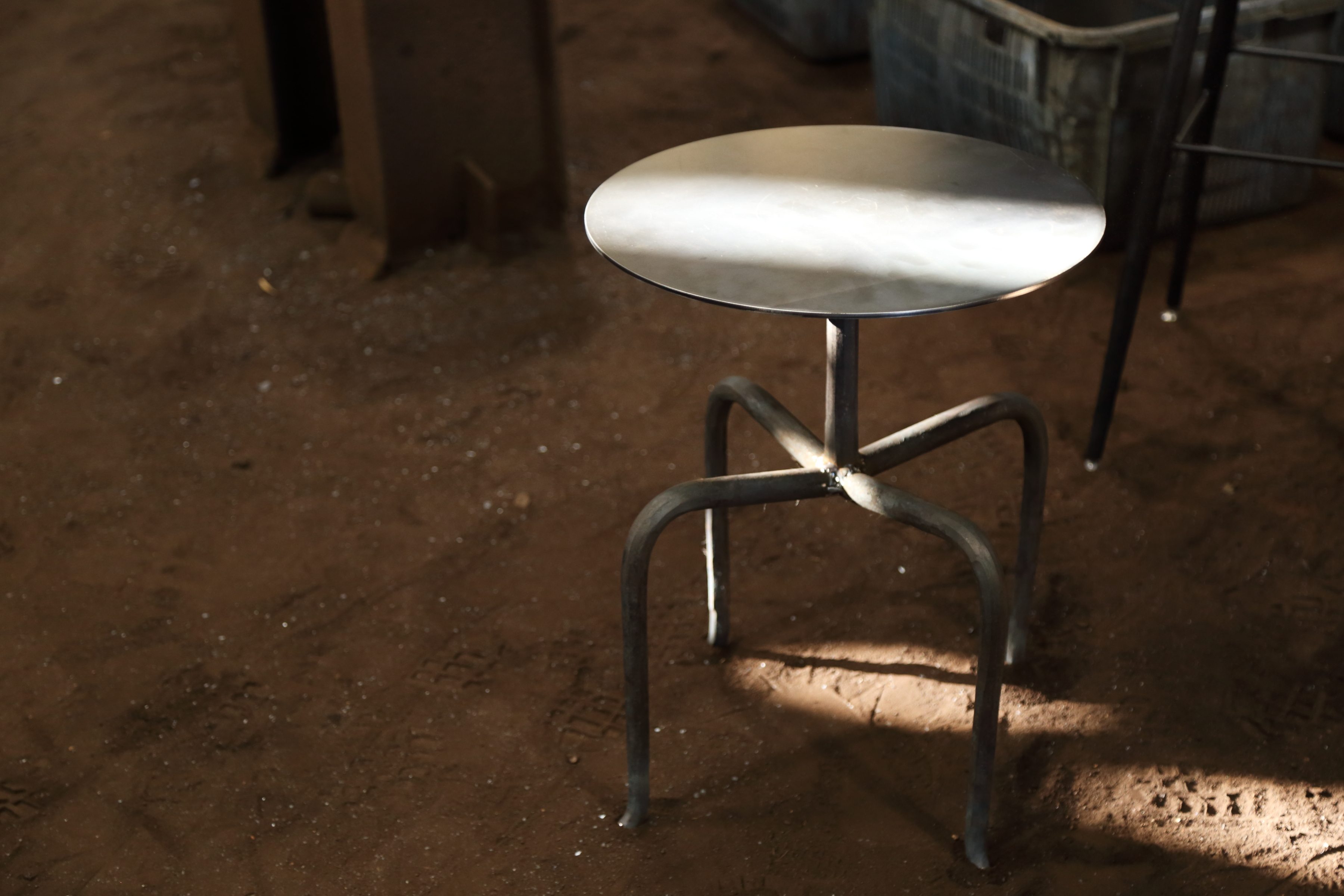 Stools lined up at the high counter ANCHOR BAR and the side tables arranged around the barroom floor are “TAonTA”-brand furniture. The heavy stools demonstrate excellent stability despite their height. People are instantly captivated by the unique presence of the side tables.
The bumps and dips of the legs are proof of made by hand, and the warm texture instantly appeals.