HOME with you, to you. “Jacquard denim” reveals the passions of craftsmanship with a history of more than 100 years Ibara-made denim, with a Japanese eye for detail 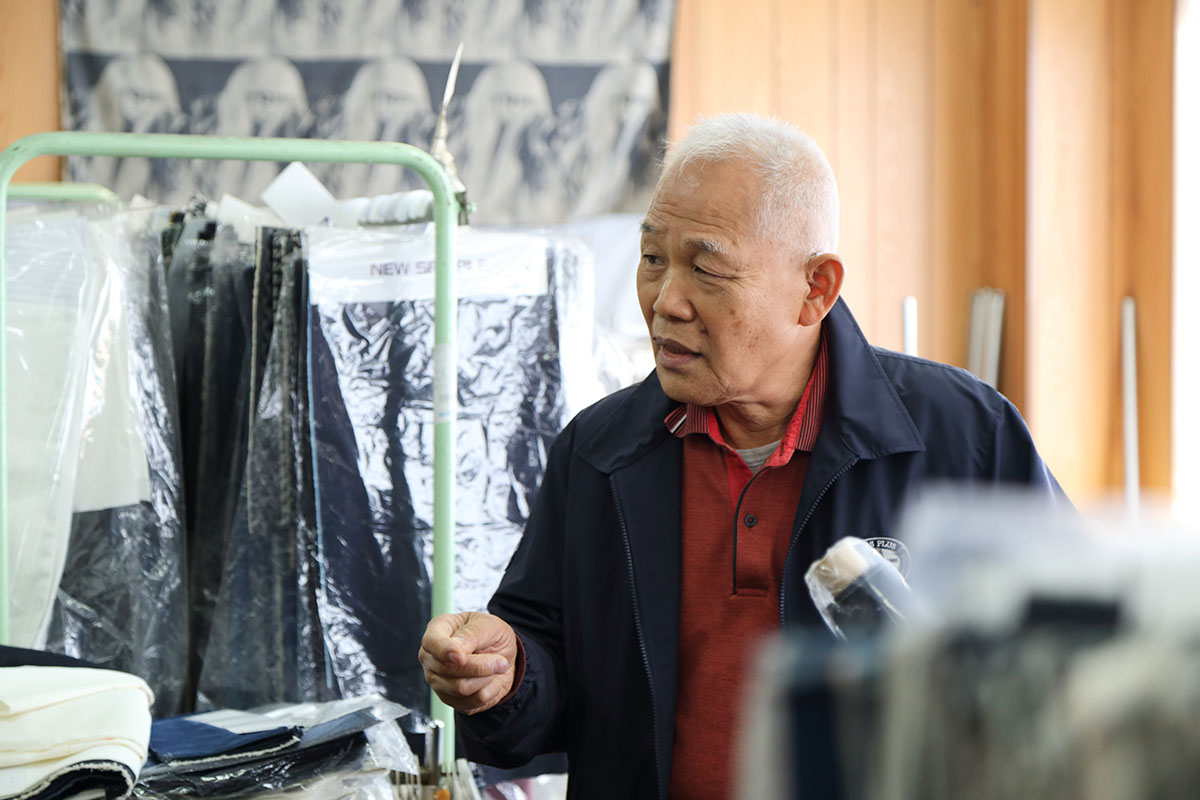 Mr. Masafumi Yoshikawa, the third generation company president of “Yoshikawa Orimono Co., Ltd.,” says proudly, “We are a forerunner of premium jeans. I went to Belgium to visit spinning and trading companies, and I went to Turkey to see organic cotton fields. I have been to many countries for making denim.” Around 1897, the company was founded in Ibara City, Okayama. At the beginning, an indigo dye factory and textile factory were established, but around 1960, they focused their energies on textiles. As to demonstrate their commitment to quality, fabric is only cut at the time of production. Mr. Yoshikawa refers to this as the characteristic persistence of Japanese industriousness.
“When we say the single word “denim,” some items can be mass-produced in abundance if high-speed weaving machines are used. But the denim made in that way is sometimes uncomfortable to wear or rough in detail. Even if the time required increases several-fold, good things must be made.” His non-negotiable spirit as a maker is reflected deeply in his eyes.

A pioneer in jacquard denim, making each item to order 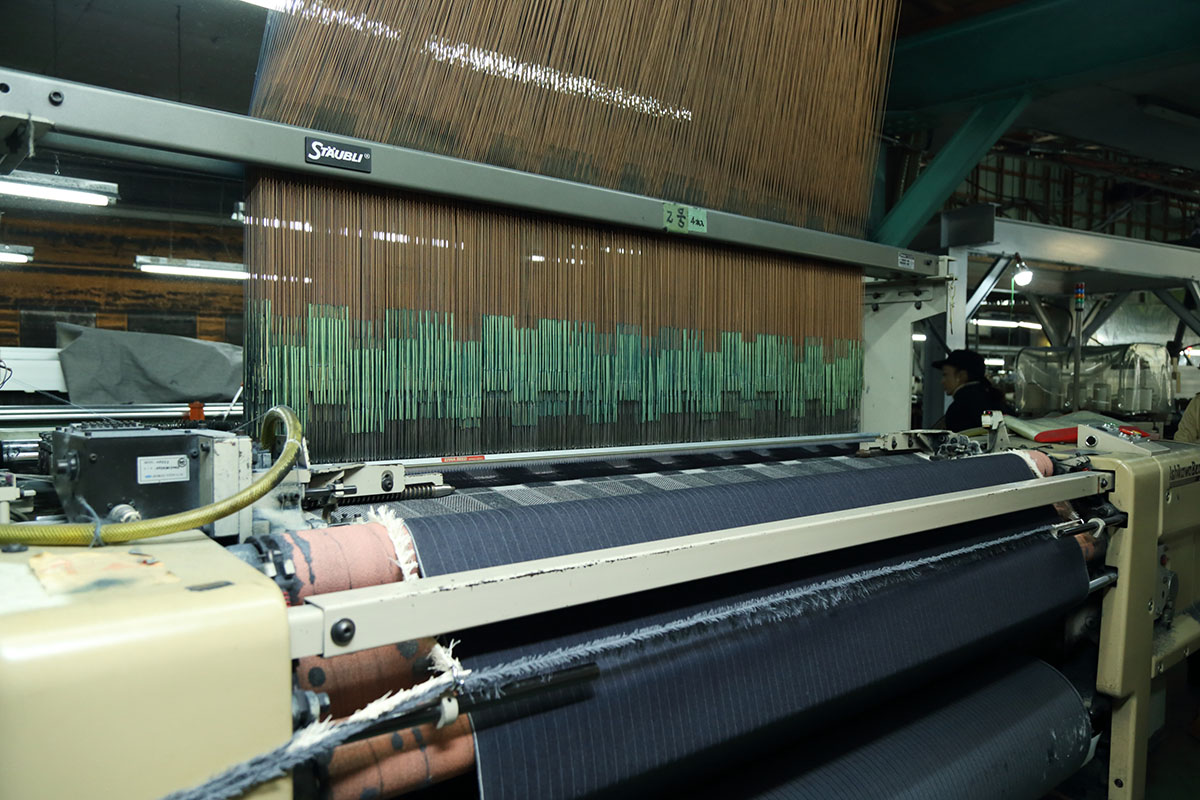 “Yoshikawa Orimono” was ahead of others in the introduction of made-in-France jacquard looms dedicated to denim. Jacquard is a special way of weaving for decorative patterns or to weave patterns into the fabric itself by interweaving warp and weft in a complex manner. It has come to be called “jacquard” because it was invented by a man named Jacquard in France during the early years of the 19th century.
Every item is a special order because patterns are woven into fabrics themselves, which is not print or embroidery. As a matter of course, finished fabrics are extremely valuable.
“At first, these patterns were hand-drawn one-by-one while making fine corrections to make textiles.” As time went on, he adopted use of high-performance weaving machines, but never forgot his toil and passion of that time. Because of the steady steps he made over the years, Mr. Yoshikawa’s spirit and passion will never disappear. 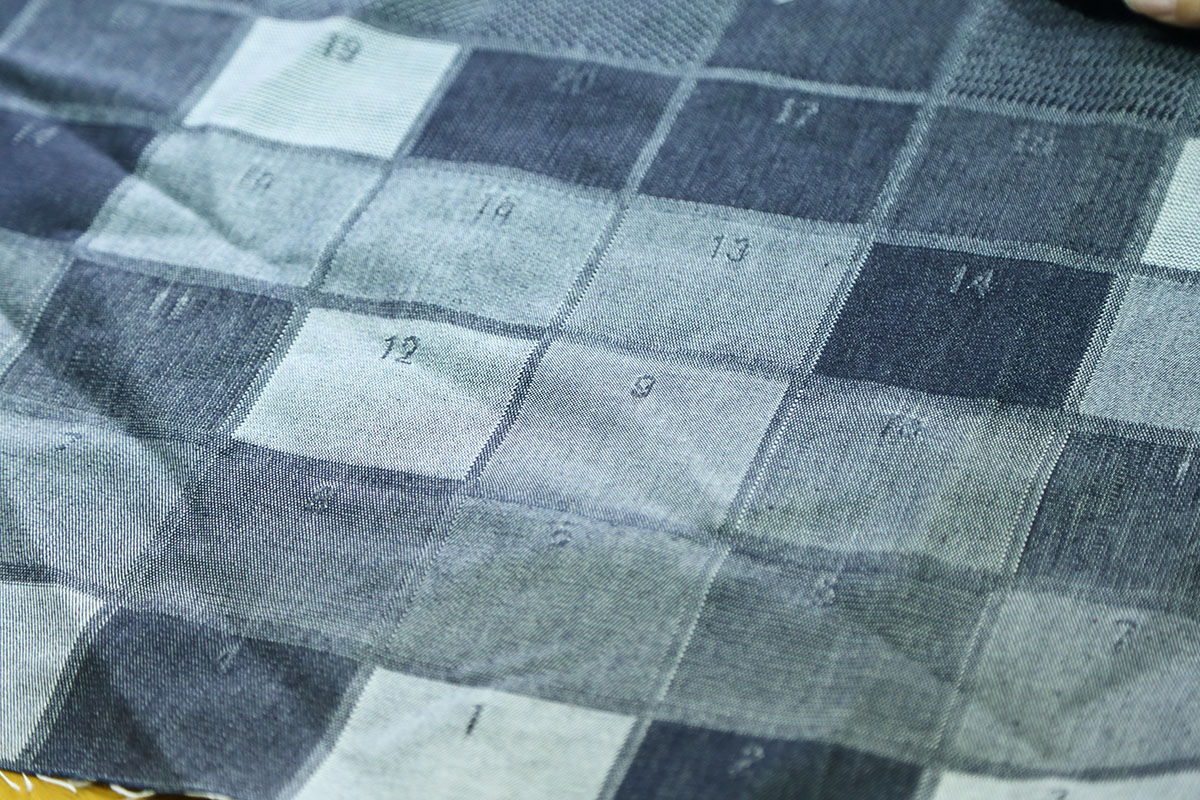 This is a texture sample of jacquard fabrics. Fabrics appear so expressively with different combinations of warp and weft in their quantities.
“A pattern will develop by weaving with favorite textures selected with a No. 1 for this part and a No. 2 for the next part, for example.” Such a casual reference is made that texture samples are not uncommon, but a sample, which is rarely seen except in the apparel profession, has a solid presence itself like a finished piece of work.
The factory in which already-complicated jacquard fabrics can be woven with pitch-perfect high quality and also with denim is absolutely treasured around the world.
In fact, it is known that Yoshikawa Orimono makes denim fabrics for luxury brands called superbrands for various companies around the world. It is quite possible that the jacquard denim worn by the world’s fashionistas may have been made in this small factory in Ibara City, Okayama.

“Work is about patience and passion.” 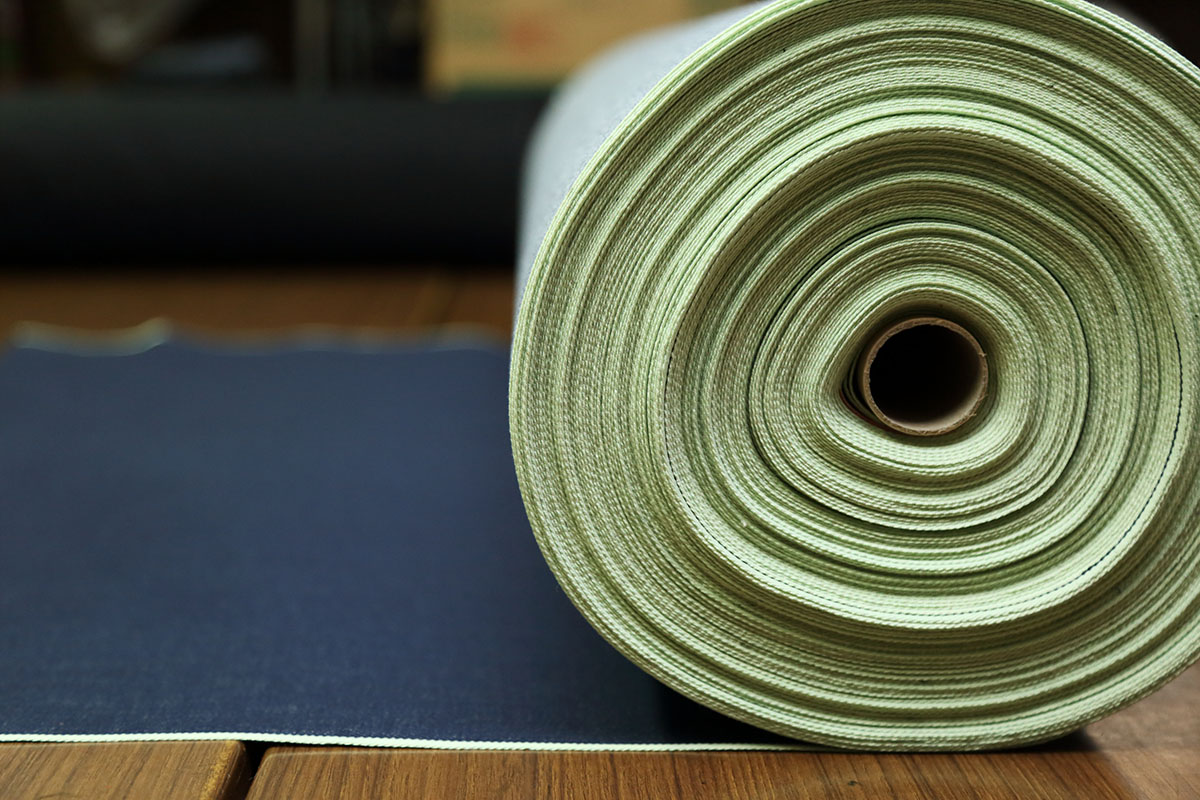 Finally, Mr. Yoshikawa pulled out genuine original fabrics woven with cotton he had grown on his own.
“I grew cotton in a field near the factory, and harvested and dyed it with indigo. The selvages are pale-green, which is Ibara City’s image color. What does it cost? It is priceless.” Being a little embarrassed, Mr. Yoshikawa smiled proudly.
“I remembered when I first helped the factory after graduating from university. I have devoted myself to textiles here for the last 50 years. Work is about patience and passion.”
The strength and flexibility of Mr. Yoshikawa who has kept the factory running are certainly woven in every denim fabric and every fabric grain created by Yoshikawa Orimono. 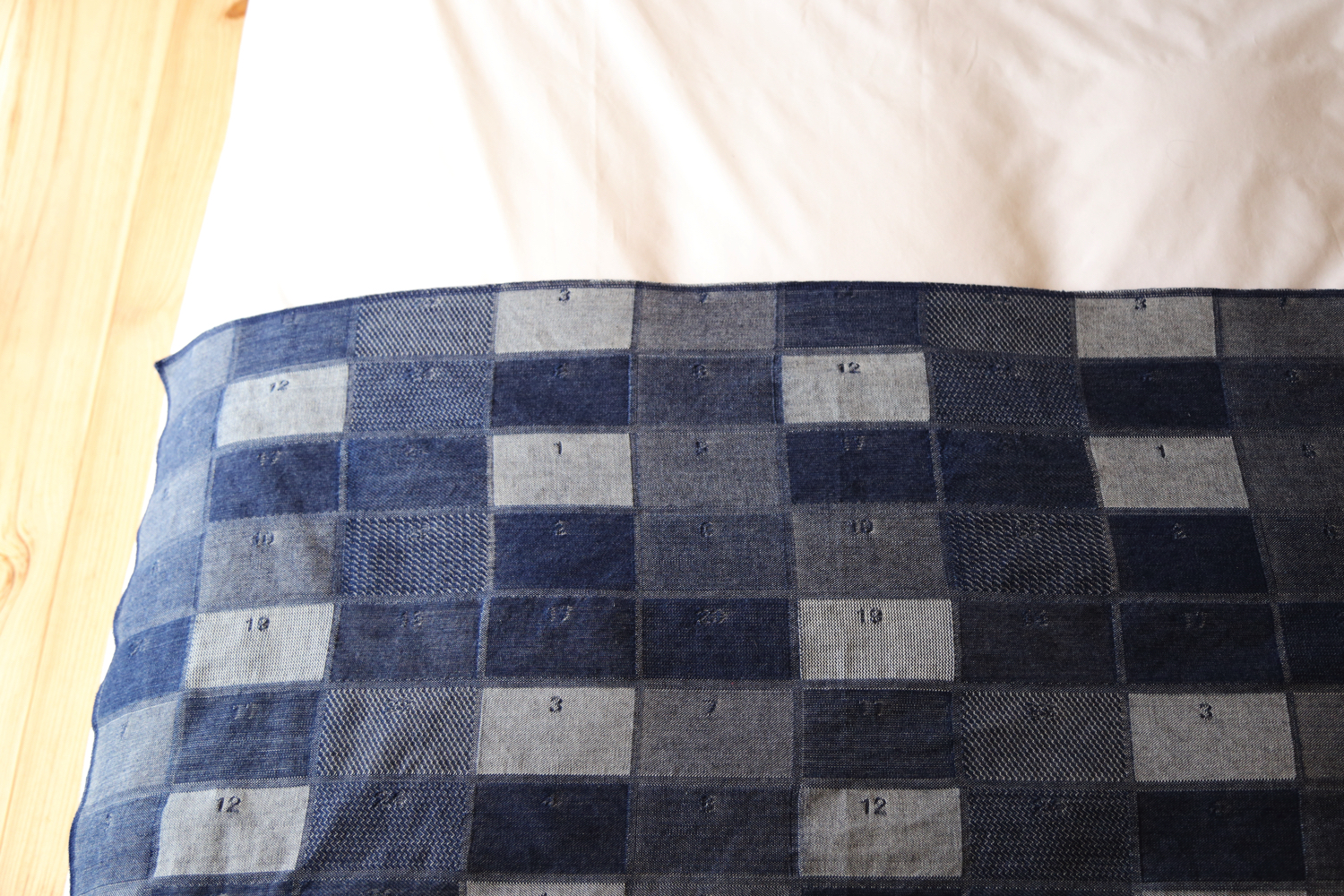 Denim made to order just uploaded as a sample jacquard texture is used for bed throws to visually sharpen the space, as well as in-house bags that are handed out to guests. Fabrics that make full use of the soft texture of jacquard are used for obi (sash belts) for room wear. Feel the pride of the town factory.

Founded around 1897 in Ibara City, Okayama, it is known as the domestic denim producing area next door to Fukuyama City. The factory mainly produces yarn-dyed denim, white fabrics, and jacquard denim. The factory operates 20 jacquard looms that are said to be rare in Japan and receives orders for high-quality denim from superbrands in various companies around the world.